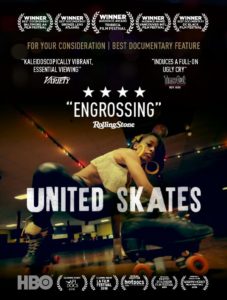 ears, roller-skating rinks have been a constant for African-American communities across the U.S., serving as a meeting ground, a place to have fun and an incubator of iconic hip-hop talents like Queen Latifah and N.W.A. As America’s last standing roller rinks are threatened with closure, a community joins forces in a racially charged environment to save the underground African-American subculture of roller skating, which has been overlooked by the mainstream for generations – yet has given rise to some of the world’s greatest musical talents. Recently released in New York and Los Angeles and shortlisted by the International Documentary Association’s award for top feature in 2018, United Skates depicts black roller skating culture “with both elegiac and euphoric beauty” [The New York Times], while giving voice to dozens of skaters who tried to skate at unfriendly establishments, facing discrimination, police searches, and arbitrary rules. Replete with archival footage, the film will be introduced by film editor Katharine Garrison, daughter of the late Lloyd and Sarah Garrison, residents of Norfolk. Watch the trailer here.