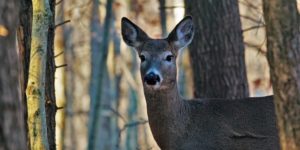 Scott Williams will speak on how white-tailed deer have had a tumultuous existence in Connecticut over the past two centuries, from being driven to near extinction to being so abundant they are a threat to public safety and forest health. Not only are deer vital hosts for blacklegged or “deer” ticks, but they are also ecosystem engineers and can dictate tree species diversity and abundance. It has been becoming increasingly evident, largely due to deer, that human and forest health are linked. Scott will discuss why proper forest management is vitally important to benefit the health of Connecticut’s citizenry.

Scott Williams received his BA from Connecticut College, his master’s from the Yale School of Forestry, and his Ph.D. in Natural Resources from the University of Connecticut. He is a Scientist in the Department of Forestry and Horticulture at the Connecticut Agricultural Experiment Station in New Haven. His research focuses on making connections between the health of Connecticut’s forested ecosystems and its people.