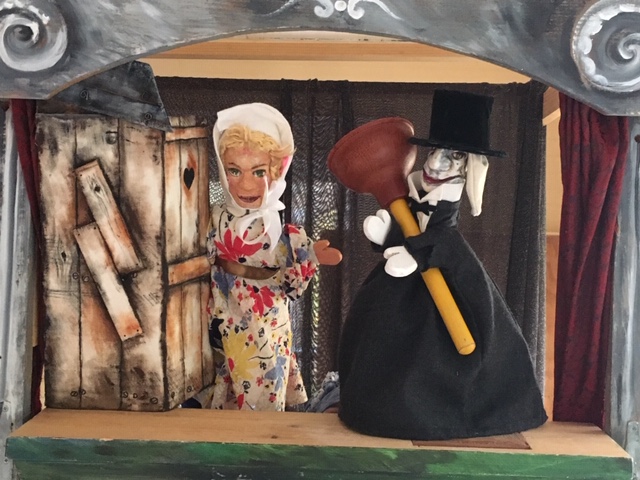 Puppet Crimes is a raucous satire about what it takes for a common puppet to survive in the face of tyranny, war and economic oppression. Keeping up a 400 year old tradition, German hand puppet heroes Kasper and Gretel struggle to survive in an old shack on the margins of society. As the centuries pass through their little puppet booth, war is always raging and Kasper tries to avoid getting blamed, arrested and drafted, yet this petty puppet always ends up being the scapegoat for larger crimes. In a grotesque world of gun-runners, outhouses, and a declining monarchy, Kasper (with the humor and wit of the common man) ducks out from under authority and manages to survive another 200 years. The third character in this spectacle is the villain Dietmar, corrupt emissary to the king who deals in weapons and bullies Kasper with his gun wielding authority. Each scene poses a grotesque circumstance with a comic twist that explores the tradition of Kasper’s character and its timeless relevance to today’s world. This is an action packed hour-long show for teens and adults, inspired by German, British and Italian hand puppet traditions with songs and musical interludes played on the ukulele.

Online registration is now closed (see below). Please call the Library 860-542-5075 to reserve a seat by phone, if there are openings.